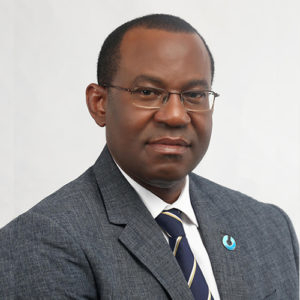 Mr Ayodele Omueti joined Caverton Helicopters on 01 November 2010 as Base Manager, NAF Base, Port Harcourt.  In June 2014, he was promoted to the position of General Manager, South/Eastern region.   Prior to joining Caverton helicopters, he had worked in various capacities in local and international airlines for a period spanning 23 years.  He started as a trainee manager in 1987 and later became senior station manager as well as logistics/operations officer (Hajj operations) for Okada Airlines.  He joined Sosoliso Airlines in May 2000 as senior station manager.  In March 2003, he joined Virgin Atlantic Airways as Duty Manager and later became the Assistant Airport Manager, PHC. In December 2005, he joined Virgin Nigeria Airways as Airport Manager, PHC. He has received various training locally and overseas to enhance his skills including the management appreciation course for airline managers, traffic/operations officer training, triple A course, airport operations course and world tracer advance course in the UK. A 2004 Virgin Atlantic heroes award finalist for airports, Ayo holds a BSc degree in Geography from the University of Benin and a post graduate diploma in management of the University of Jos.