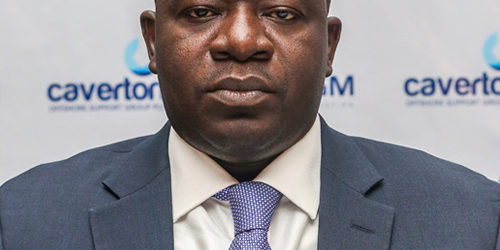 In notification to the Nigerian Stock Exchange (NSE), COSG said Choms will take over from incumbent MD, Mr. Sola Falola, who will step down on July 31, 2014.

According to the company, having successfully served out two terms of four years each, Falola is stepping down in line with the company’s corporate governance practice.

“An economist and a former banker, Falola will however remain a member of the board of COSG, and he is expected to play critical roles as the company diversifies into the provision of first-of-its-kind aviation training and aviation maintenance, repair and overhaul services in Nigeria.

Chairman of COSG, Mr. Aderemi Makanjuola, who announced the repositioning, said: “Falola has served the company meritoriously. He has contributed in lifting Caverton Helicopters to enviable heights and into becoming the pride of the aviation logistics services sector in Nigeria and beyond.

“Apart from retaining his position as a board member of the Caverton Group, he will also continue to be the Chairman of Caverton Aviation, Cameroon.”

Makanjuola noted that the new management change is aimed at strengthening the company’s capacity to single-mindedly pursue its diversification plans.

“It is expected that the change will enable more focus by the group office management on the new business initiatives while Captain Choms and his team will focus on deepening the aviation logistics part of the COSG business,” he added.

According to him, this management change is coming at a time that Caverton is embarking on new business initiatives  including the Aviation Training Center (ATC) and Maintenance Repair and Overhaul (MRO) Facility.

COSG had at its last annual general meeting in Lagos last June announced plans to build a 40,000 square metres facility at the Murtala Mohammed International Airport in Lagos for in-country training of pilots and engineers and aircraft maintenance, two areas that have serious implication for national capacity development, efficiency and safety in the aviation sector.

Expected to take-off next year, the facility will be the first commercial flight simulation training centre in Africa. CAE will provide a turnkey solution that will include the start-up, maintenance and operation of the centre for a specified period pending the full transfer of knowledge and skill-sets to Nigerians.