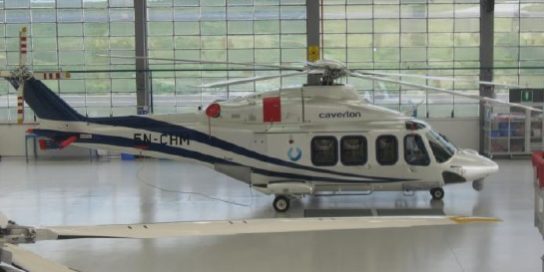 LAGOS, NIGERIA – 27 MAY 2014 – Caverton Offshore Support Group (“CAVERTON”, ISIN Code: NGCAVERTON07), a leading provider of marine, aviation and logistics services to local and international oil and gas companies in Nigeria announced today the acceptance of a brand new AW139 helicopter, the 7th in its fleet. As part of the company’s earlier stated plans to embark on fleet expansion, the new aircraft adds to the growing fleet of Caverton’s Agusta Westland helicopters thus making it the largest fleet in sub-Saharan Africa.
The new helicopter is dedicated to the Shell Petroleum Development Company (SHELL) contract which the company won in 2010 through a competitive bidding process.

The aircraft was manufactured in Italy and is pre-equipped with the Forward Looking Infra Red (FLIR) camera, which allows airborne pipeline surveillance to be carried out and images streamed in realtime to base stations. It also has thermal imaging systems which are used for surveillance and threat detection.
The Caverton team was at Agusta Westland’s factory on 5 May 2014 to inspect the aircraft and ensure that it fully complies with the latest stringent requirements in terms of performance, safety and operational specifications.The aircraft is expected to commence operations before end of half year 2014.
In addition to its listing on the Nigerian Stock Exchange, Caverton Offshore Support Group announced its full year 2013 results which showed revenue increasing by 16% to N18.7 billion from N16.1 billion in the previous year, primarily driven by contributions from IOC contracts. EBITDA went up by 32% to N5.9 billion from N4.5 billion in Dec 2012 while the company’s net income rose by 40% to N1.9 billion from N1.4billion the previous year.