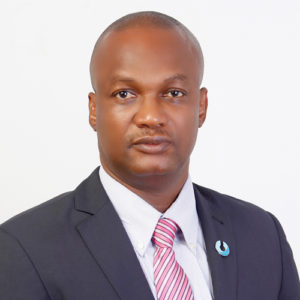 Capt Ibrahim Bello started his aviation career with the Nigerian Air Force in 1987. He served with the Presidential Air Fleet Abuja as an Aircraft Maintenance Officer rising to become the Chief Engineer of the Hawker and Gulfstream Fleets respectively. He retired from the Nigerian Air Force in 2004 with the rank of Squadron Leader. On retirement from the Air Force, he proceeded to Delta Connection Academy, Florida, USA where he obtained his Fixed Wing CPL Multi / IR in 2004. He joined Bristow Helicopters after his helicopter conversion course at Bristow Academy, Titusville in March 2005. Aside some management duties at Bristow he also flew the Bell 212, Bell 412 and Sikorsky 76 helicopters across all of Bristow Bases in Nigeria (Lagos, Eket, Port Harcourt, Warri and Escravos) on various contracts. Ibrahim joined Caverton Helicopters in September 2011 flying the EC155 and AW139, and also serving as a Line Training Captain on both types. In June 2012, Ibrahim was appointed the Base Managing Pilot, Port Harcourt Shell until his appointment as the Shell Contract Manager in August 2014. With the proven range of skills successfully demonstrated in managerial and operational roles, Capt Ibrahim was named Director of Operations in September 2015. Captain Bello holds the NCAA Aircraft Maintenance License with various ratings and the ATPL Multi Engine license from the FAA and NCAA. He holds a Bachelor of Science (Hons) degree from the Nigeria Defence Academy and is also an IATA certified Dangerous Goods Instructor. Ibrahim has attended various management and professional courses at home and abroad including the Prestigious Joint Command and Staff College Jaji, Kaduna Nigeria. He has earned various Medals and Awards from both his Military and Civilian Careers.